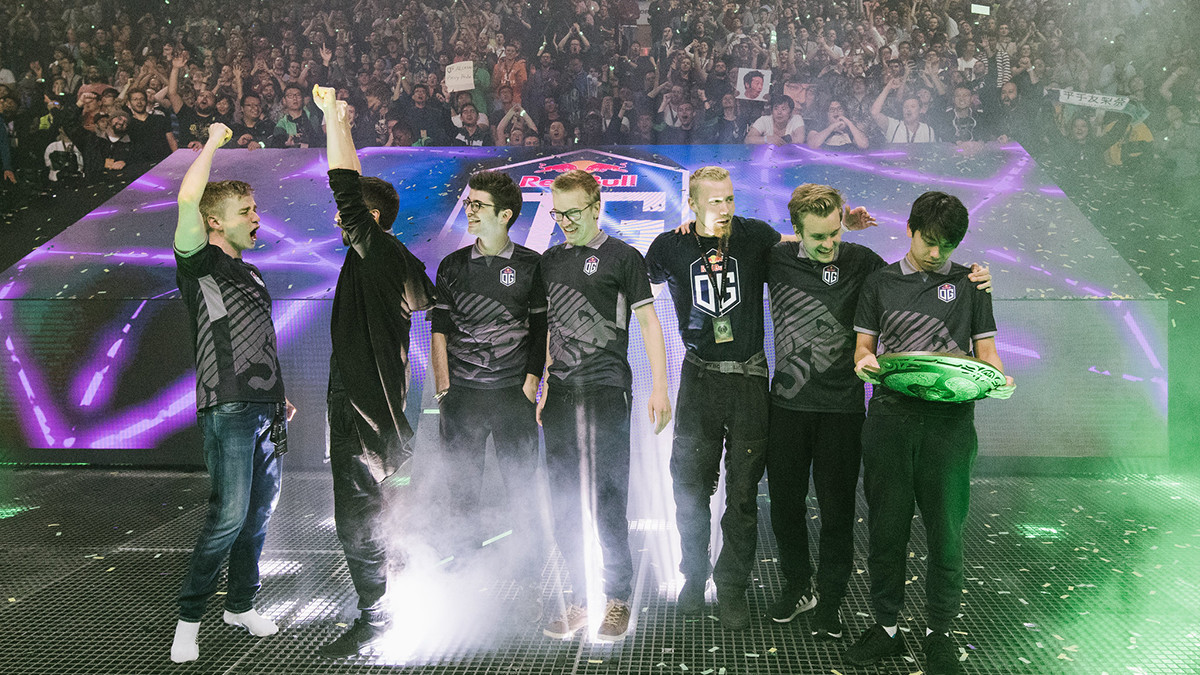 posted by SmittyW.,
OG surprised the Dota scene last year, when they took their first world champion ship at The International 2018. After the event, they had a hard time to get points in the 2018/19 DPC season. Will the reigning champion surprise again?
ADVERTISING:
It must have been an elevating moment for Johan 'BigDaddyN0tail' Sundstein and his team-mates. After only qualifying for TI8 through the European Online Qualifiers and a solid group stage, OG displayed an incredible run in the Upper Bracket. They bested Evil Geniuses and PSG.LGD among others on their way to the Grand Finals.

There, they engaged in an epic rematch with LGD which is considered to be one of the best Dota series of all time and has given birth to one of the most iconic memes in our community. After a rough five game battle, OG came out on top 3-2 and lifted the Aegis. This was a dream come true.

It is hard to win a world championship but it is even harder to stay on the same level or even improve from that. OG wasn't quite the same after TI8. It was as if the magic which everyone saw and felt back then had vanished. Anathan 'ana' Pham left mid-November shortly before the first Major qualifiers to take some time off. He was replaced by the Swedish player Per Anders 'Pajkatt' Olsson L., but OG were not able to qualify with the substitute.

For the remainder of 2018, the European organisation wasn't able to produce any results that are worthy of the best team in the world. At the beginning of 2019, Pajkatt left the team again and was replaced by Igor 'ILTW' Filatov, a loan player from the Russian side Espada. With him on position 1, OG managed to qualify for ESL One Katowice 2019, their first big tournament since TI, but the ESL event didn't award DPC points.

Yet, N0tail and co. placed third in Katowice - considering the months before, this equalled a redemption for the reigning world champion. However, in order to come back to the top and to defend their title, they had to deliver even better results. Preferably at tournaments that distribute points for the TI9 qualification.

Being third in Katowice was a decent result, but in order to win tier 1 tournaments again, OG obviously needed a player of ana's caliber. And who is better suited to fit into his role than he himself?

With ana's return, the squad began catching up with the other highlevel teams. They even qualified for the MDL Disneyland Paris Major and winning the tournament, or at least doing well enough, would almost ensure their TI9 ticket. Their performance earned them a 5th-6th place, although one has to acknowledge that they did not have the most difficult group (apart from facing EG). Yet, beating Virtus.pro in the Upper Bracket was quite a feat, even though the Russians were at a low point themselves.

The tournament showed that OG is still a good team, but they just didn't stand a chance against the tier 1 forces of the Dota scene. EG, Team Liquid and Team Secret were on another level and seemed almost invincible for them.

The EPICENTER Major in Moscow would be the last chance to qualify for TI9. Next to several other teams that had an eye on the juicy DPC point pool, OG had to give their best to make it. However, the tournament began as a catastrophe for the organisation. Team captain N0tail suffered from a severe infection and couldn't take the field for his team. Instead of him, OG's coach Titouan 'Sockshka' Merloz played at Epicenter resulting in disappointing 0-2 in the group stage.

The team requested a rescheduling of the first game of the playoffs, as they were hopefully waiting for N0tail to recover. The other teams that were affected by this request, Evil Geniuses, Ninjas in Pyjamas, and paiN Gaming agreed, but this didn't help. The poor didn't recover in time and OG had to play the one-game deathmatch against EG without their captain.

Sometimes sport writes strange stories, and what happened next was surely one of them. After a 52-minute game, OG emerged victorious and advanced to the next round - only to find Team Secret of all teams waiting for them. Team Secret has been the most successful team of this season and were the absolute favourites. The weakened TI8 champion was considered to have no chance against the world's best team but then they did it.

OG surprised everyone once again, and eliminated Team Secret from the tournament 2-0, still playing with Sockshka. Not only did they overcome this Dota Goliath, but they also qualifed for TI9 in doing so. Their second loss to LGD didn't hurt as much afterward, as they achieved the almost impossible.


Into an unknown future

It is hard, based on their latest results, to give a realistic estimation of their chances at The International 2019. Yes, they are the reigning champion. Yes, they have become better than they were half a year ago. Yes, they do best when they are being underestimated. But is this enough to become the first team to lift the Aegis twice in a row?

At the peak of their skill, the team is definitely among the best in the world. ana is a magnificent carry with few people who can compete on this position. Also players like Sebastien 'Ceb' Debs, Jesse 'JerAx' Vainikka, and Topias 'Topson' Taavitsainen belong to the best in the world. And we must not forget their amiable captain who led them to victory before. OG have all what it takes to become a world champion. They put that to the test. But whether they will prove it a second time, remains to be seen in the near future.