Chaos & Matumbaman: The story of kicks and rejections 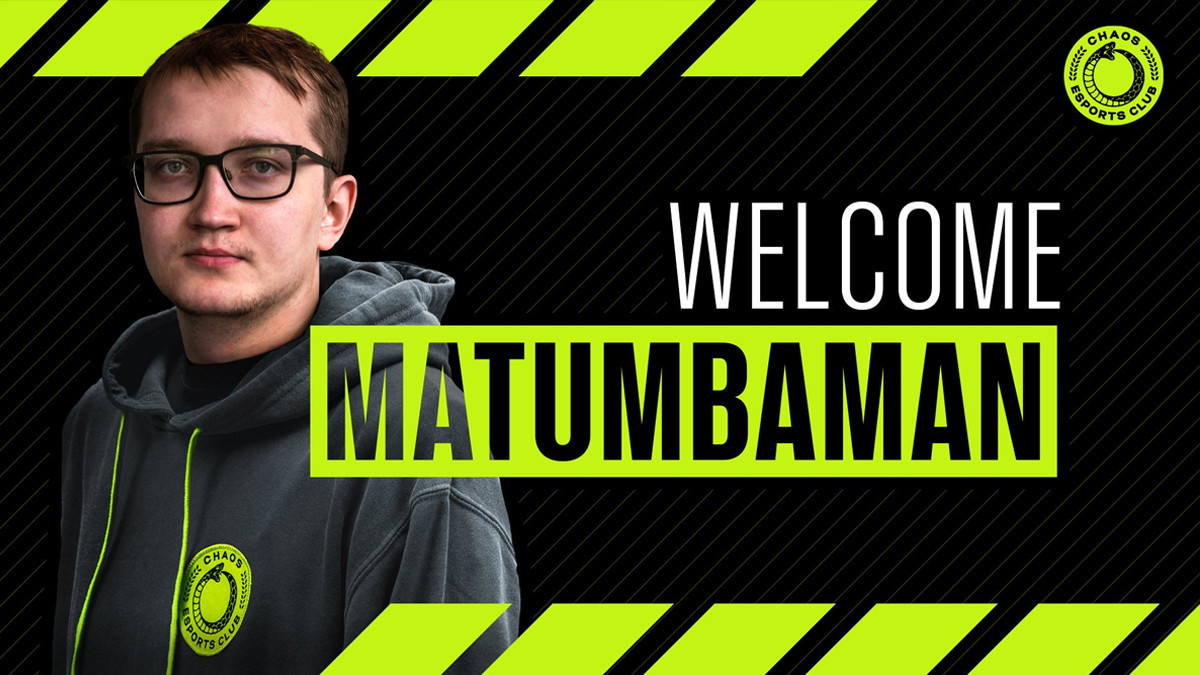 posted by EskayDota,
Chaos have been to four of five Majors but didn't qualify for TI. With Matumbaman and vtFaded, they complete their roster of rejects.
ADVERTISING:
In this article, the current Chaos roster will be discussed, alongside Gunnar, who recently departed the roster, as it is all a part of the story of their formation.

Milan 'MiLAN' Kozomara has been around since the early days of the Dota scene. Having played on 19 different teams, he’s certainly gained a lot of experience and knowledge over the years. Most recently, he notably played in J.Storm, alongside TI5 champion Clinton 'Fear' Loomis, probably the biggest opportunity for the support player.

There are so many plays Milan has made as impressive as this one.

Achieving some pretty impressive results with the roster, fans began attributing J.Storm’s good performances to Milan, and he began getting some serious attention from other players. Unforunately for the flashy support player, he was kicked just before the Chongqing Major, something that, once again, fans attributed his plays to J.Storm’s qualification.

Finding himself on Winstrike, a brief stint on the CIS team would end with an opportunity to play under the wing of the fearless Rasmus 'MiSeRy' Fillipsen, in what is realistically a bigger opportunity than that of J.Storm.

Everybody knows the story of Nico 'Gunnar' Lopez. Being kicked by Jacky 'EternaLEnVy' Mao is a part of the Dota 2 professional scene; at this rate an increasing number of players are able to say that they have experienced the effects of a pizza party paid for by Envy. Gunnar’s double kick after helping Team Team qualify for the Major was a drama unparalleled by many.

If you thought MilaN's rosh steal above was good, just try and follow this clip below.


Although he has now been released from the roster, Misery provided some respite for the young mid player, offering him an opportunity to play under one of the most respected non-TI-winning captains. It is a shame he has left the team, as many believe he was the reason Team Team made it to the Major, and seeing him play in a roster with equally skilful players would have been a delight to watch.

Team Secret was Maurice 'KheZu' Gutmann’s biggest break in the Dota scene. Since his departure from Clement 'Puppey' Ivanov’s organisation back after TI7, he has struggled to quite keep up the same form he once had. Going from team to team, his latest shot was with the organisation Vega Squadron, with a roster that KheZu captained.

Failing to make things work out as planned, the roster split after about 5 months of playing together. Since, he has been acquired by Chaos. Before his joining Team Secret, he was considered one of the best offlane players in the Dota 2 scene, but perhaps lacked a bit of experience having only started his professional career 11 months year prior. Chaos, and playing with the current roster is KheZu’s brightest light since the days of Team Secret.

Cheng 'vtFaded' Jia Hao is a bit of a wildcard on the Chaos roster. The 20 year old Malaysian has his first professional appearance listed as happening in 2017, and is most known for time on Clutch Gamers, Geek Fam and For The Dream, who’s biggest achievement in the top tier was qualifying for ESL One Katowice 2019; an accolade people attributed to vtFaded.

There was a rumour circulating that vtFaded would have been amongst the favourites to join PSG.LGD after their manager announced a reshuffle following a slump in their performances. People believed he had impressed on Sun Gaming and again on MYSG+AU with Winter. People thought it was only a matter of time before vtFaded found himself in a top tier roster; and Chaos will be the organisation to provide that home.

Rounding out our roster for the International 2019 qualifiers is Cheng “vtFaded” Jia Hao, a young up and coming carry player from Malaysia.

Similarly to every other player on the Chaos roster, many believe that vtFaded has the ability to be easily amongst the best of the best, and especially under the guidance of such an experienced captain as Misery, he’s certainly a character that adds a lot of hype to an already hyped roster.

Matumbaman is the huge name that rounds out this roster of extreme talent. You’ve got an ex-Team Secret player, a player who was tipped for a spot on LGD, MiLAN who impressed beyond belief earlier this season, 2nd place TI captain Misery, and TI7 winner and arguably the best carry in the world, Matumbaman. He fits into this roster of raw talent.

Does Chaos make sense for Matumbaman? Not particularly per se, he has never played with any of these players before. It’s up in the air as to whether this roster can rise the ranks or fall, but you can be certain that there is a wealth of skill in this roster. The question that had been on everybody’s minds since the swap of Omar 'w33haa' Aliwi and Matu, is whether w33 was an upgrade from Matumbaman.

Kuro S. 'KuroKy' Takhasomi had said recently that as a team that had been together for so long, other teams had time to figure them out. Something new, i.e. w33, adds a completely new element of surprise to the roster, and at Epicenter, they look refreshed. From Chaos’ perspective, Misery and w33 had been playing together for a long time and with vaguely minimal success excluding their TI6 run. The swap would, at face value, seem to be a swap that works in favour of both teams.

To conclude, this roster has the potential to compete in the top of the top tier. It combines a wealth of experience and success with less experienced but growing talent. Matumbaman fits into the roster nicely – a ridiculous hero pool will compliment Misery’s drafting.

To be a contender in the European region at the moment is a challenge, but with Secret, OG, Team Liquid, Ninjas in Pyjamas and Alliance all qualifying for The International already, Chaos would be the next favourites to join them through the open qualifiers.