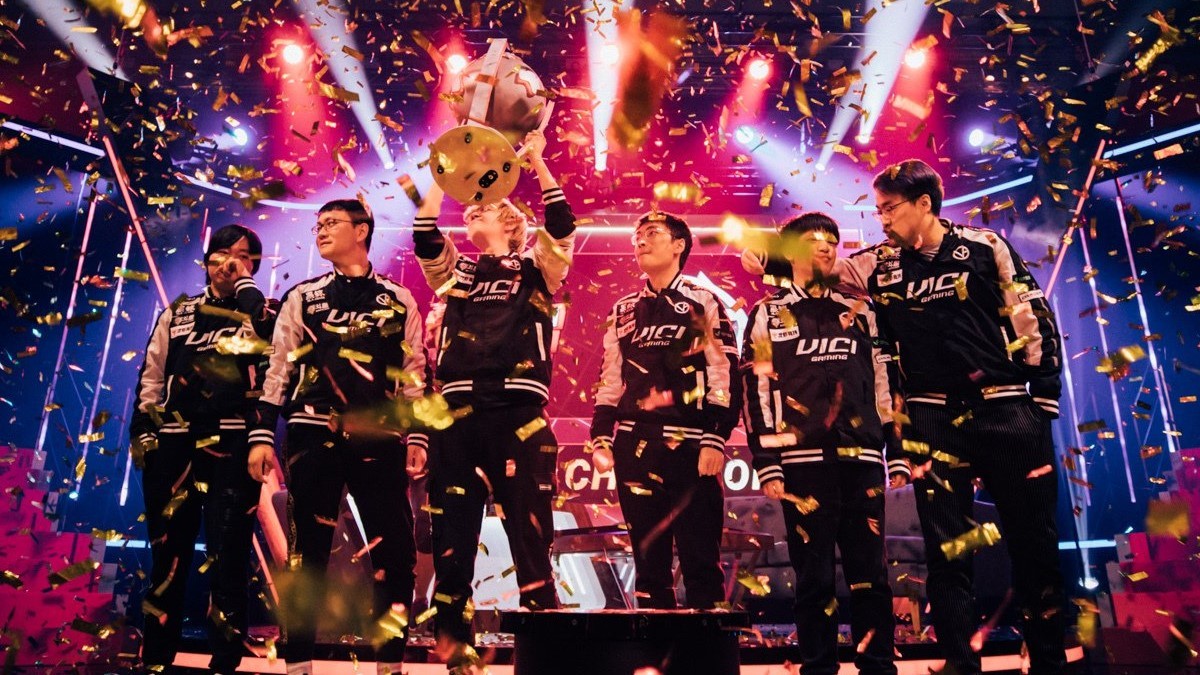 posted by CozmikMonkey,
It was an intense final series in Stockholm, but after five incredible games of Dota 2 it was the StarLadder ImbaTV Dota 2 Minor winner Vici Gaming that came out on top of the CIS squad Virtus.pro to be crowned champion of DreamLeague Season 11.
ADVERTISING:

Vici Gaming showed up to the Grand Finals ready to play. From the very start of the first match they were looking sharp, able to build an early lead and provide Zhang 'Paparazi' Chengjun with good farm for his Morphling. Zeng 'Ori' Jiaoyang was in particularly good form on Death Prophet, able to control much of the map and provide an anchor for Vici to push around. Roman 'RAMZES666' Kushnarev, however, was finding a lot of farm on Phantom Lancer, and was able to farm up an early Heart of Tarrasque; at the 26th minute VP were able to equalize the game, but Vici would not be outdone in Game One.

Vici Gaming began making very deliberate movements around the map, taking smart fights and rebuilding their lead. After a strong teamfight they pushed into VP's base and take two lanes. With the game squarely in their favour, they regrouped, made a final push, and secured victory; Paparazi finished 12-0-12 while Ori finished 13-3-9.

Both teams drafted some hard farming cores in the second match, with Ori on Arc Warden and Ramzes on Anti-Mage. Vici again jumped out to an early lead, but good rotations by Virtus Pro allowed them to take a necessary midgame teamfight and equalize the net worth. After this break in the momentum, Ramzes was able to farm out of control. Vici tried their best to kill the blinking carry, but even when they came close, the rest of VP had their young carry's back.

Despite Vici Gaming's best efforts to posture and try and take out the Anti-Mage, he was simply too strong to fight, finishing the game 11-1-13. After a few more lost teamfights Vici was eventually run over by Virtus Pro. A special mention goes out to Aleksey 'Solo' Berezin's Shadow Demon who was often sacrificed for the greater good, but also had a game-high 25 assists, often able to, by himself, save his carry from death.

In the third match Vici reminded everyone that they did not make the Grand Finals by chance. They stomped Virtus Pro in 22 minutes, holding the CIS team to a mere 8 kills. Paparazi was given a dream safelane on his Terrorblade alongside Dy on Vengeful Spirit. Pavel '9pasha' Khvastunov died three times by the 7 minute mark to Vici's safelane, giving Paparazi such a strong farming start that he had a Butterfly at 20 minutes. Worse still for VP was Ori, who ended the game 10-0-5 on Bloodseeker, and ran roughshot over Virtus Pro all game. VP made a last desperate attempt to come back into the game at the 21 minute mark, but it ended quickly for them, forcing them to call the GG.

Despite the poor showing in the third match, Virtus Pro were not about to go home without taking the series all the way. The fourth match was a good old slugfest, highlighted by a surprise Storm Spirit pick for Vladimir 'No[o]ne' Minenko.

The game was even through 16 minutes, but soon after VP kicked it into a higher gear, able to take better engagements around the map and provide good farm for Ramzes on his Juggernaut. No[o]ne specifically was doing an immense amount of work throughout the game. A critical teamfight came at the 32 minute mark and, even though it originally looked good for Vici Gaming, No[o]ne ensured that it would end positively for Virtus Pro.

After that fight VP began to push against Vici Gaming with a methodical purpose, taking towers and pushing the base. Vici attempted a base defence, but it only resulted in a highlight reel play by Pasha on Dark Seer who more than made up for his poor performance in the third game. VP was able to take the mid barracks and continued pressing their advantage until Vici could simply no longer defend and were made to concede at 39 minutes.

In the end, however, Vici Gaming would not be denied their trophy. They were explosive in the decisive game, handling Virtus Pro in only 21 minutes and keeping them to a measly 6 kills. Even after drafting a Medusa for Ori, Vici was all incredibly active in the early game. As a team they were simply dominant. Virtus Pro had very little chance to comeback at any point in the final game.

By 19 minutes Vici Gaming was attacking and destroying VP's tier 3 midlane tower, and by 21 minutes they were inside Virtus Pro's base, forcing them into a final, tournament-deciding confrontation. However, as soon as VP actually tried to fight the surging Chinese squad they were ripped apart and forced to relinquish the game as well as the tournament.

Vici Gaming finish DreamLeague Season 11 in commanding fashion, showing everyone that they are a team to be feared.

Is Vici Gaming the best team in the world?