Keen and Gambit draw first blood at The Bucharest Minor 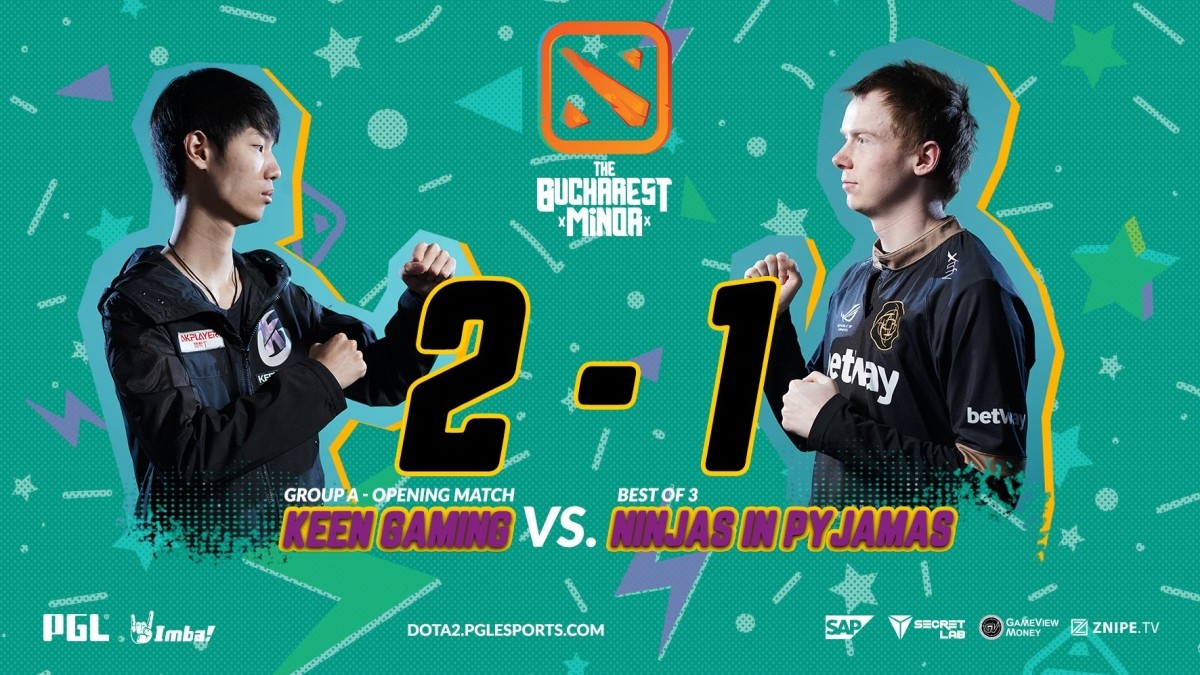 posted by Olucaron,
The Bucharest Minor is now under way, and we’ve already had two fantastic matches. China’s Keen Gaming overcame Ninjas in Pyjamas, while Gambit Esports took down North America’s Team Team in the opening series of the day.
ADVERTISING:

Keen win the battle of the group’s big two

Ninjas in Pyjamas and Keen Gaming were meeting for the first time in competitive Dota 2, and as the two favourites in the group, the match was to be a measure of their relative strengths — and it was the Chinese side that showed the most intent.

The first game was a destruction, to say the least, as Keen took down NiP in a devastating 21-minute encounter. Wang 'Old chicken' Zhiyong and Zhai 'Ying' Jingkai ran rampant, recording 13/0/8 and 11/0/12 figures on Faceless Void and Dazzle respectively.

The key to the game was Keen countering Peter 'ppd' Dager’s famed drafting ability — leading AdmiralBulldog to comment on the NiP captain’s insistence on his side playing Terrorblade mid.

The second game saw NiP roar back into the match. Although not quite as dominant, it was a comfortable win that saw Adrian 'Fata' Trinks’ Pugna lead the charge in a 29-minute, 14k victory.

And so, to a decider. Despite a close early game, Keen gradually seized the game. A brief pause to resolve a lag issue did little to change matters; Keen pulled further ahead, and with a 40k, 43-14 lead just ten minutes later, they soon forced the GG from NiP — with Yang 'Eleven' Wei Ren’s Death Prophet going massive in recording figures of 22/2/11.

Our next game in the group is at 15:00 CET versus TEAM TEAM 🇺🇸 / @GambitEsports 🇷🇺 (losser)
📺 https://t.co/ocyKQ7PEu7#GONINJAS #DOTA2 #BucharestMinor pic.twitter.com/Qb07j6RN1W

In the group’s other opening match, Gambit overcame Team Team in a three-game, comeback series win.

Game 1 was a closely fought affair. It was ultimately a battle of two carries, with Nikita 'daxak' Kuzmin and Eric 'Ryoya' Dong recording similar figures. A 35-minute game saw the lead change hands several times, before Team Team decisively emerged from a skirmish on the half-hour mark to give themselves the advantage in the series.

Daxak secures a triple rampage to secure a victory over TEAM TEAM! Going up against Keen Gaming in winners' match after a break #BucharestMinor pic.twitter.com/iFQQ6fkPhv

Game 2 was anything but close. Team Team recorded just two kills to Gambit’s 22 as the North American side were humiliated inside 23 minutes. Three Gambit players recorded perfect KDAs as the CIS side amassed a 24k advantage by the end.

First blood in the deciding match went to Team Team, but the game remained close — despite over 20 shared kills in the opening 20 minutes, the lead rarely topped 2k. However, Gambit soon pulled ahead, a series of skirmishes establishing their advantage. Led by Daxak’s Medusa, they closed out a relatively comfortable win in 37 minutes.

Next up is the Winners’ Match, which sees Keen take on Gambit after a short break, while Ninjas in Pyjamas and Team Team will do battle later this afternoon to keep their Upper Bracket hopes alive.