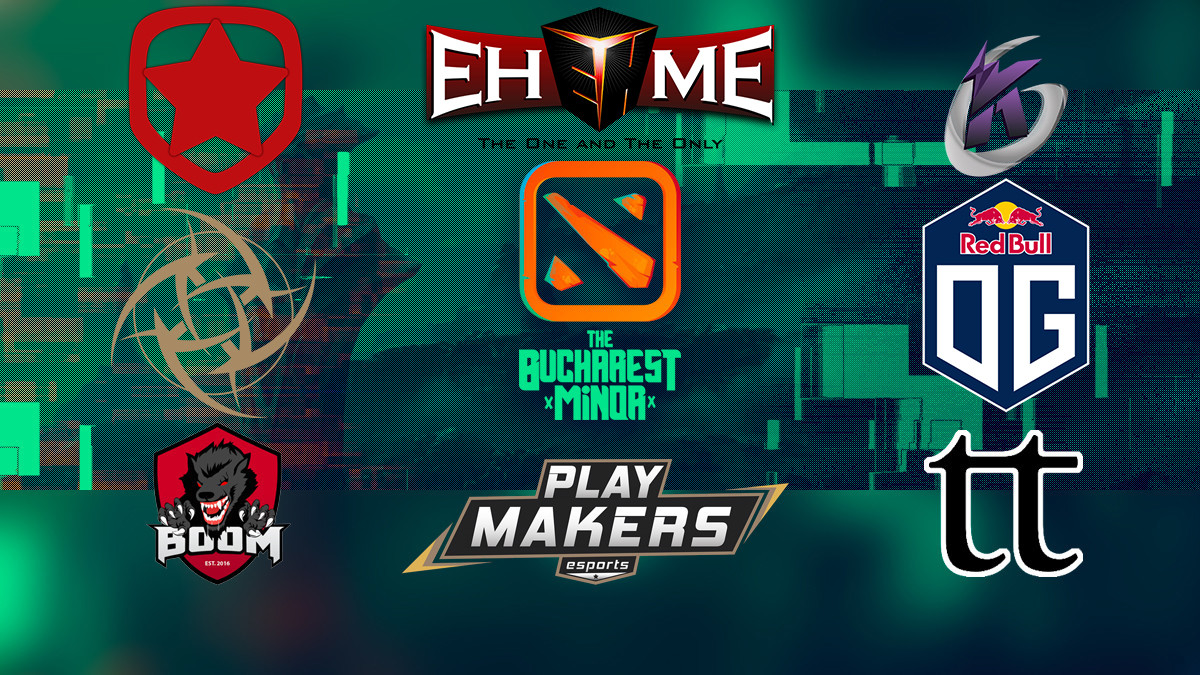 posted by joinDOTA Staff,
Eight teams will fight for the last spot to compete at The Chongqing Major — only one team can win The Bucharest Minor and get the ticket to China. Here's the joinDOTA Power Ranking for the second Minor of the season.
ADVERTISING:

The all-Peruvian squad of Playmakers Esports is the biggest surprise of the South American qualifier — they had a tough competition with both Infamous squads.

They demonstrated that they can compete with the top-level teams from Peru by beating Jacky 'EternaLEnVy' Mao's Infamous twice.

The Peruvians definitely deserve to compete at the Minor and thanks to players like Alonso 'kotaro' Leon Arango or Steve 'stingeR' Vargas they have enough experience. Both of them already attended different Valve events.

However, the chances are low that Playmakers run will continue in Bucharest — the competition is tough and the other seven teams are eager to win the tournament, too.

BOOM ID demonstrated in the Southeast Asian qualifier that they're an upcoming team of that huge region. The Indonesians had to beat world-class players at Mineski and won against Clutch Gamers to get a slot for the Minor.

The core of the squad is already playing together for more than a year, only the carry player Rafli 'Mikoto' Faturahman joined in November 2018. The qualification for the Minor is by far the biggest success the team had so far on an international level. They're on the same level as Playmakers Esports, but can't be counted as one of the top teams at the Minor.

Team Team was the big surprise of the North American qualifier around the veteran player Michael 'ixmike88' Ghannam. The captain had his last appearance on a Valve event in Summer 2013 at TI3, when he played for Team Liquid.

The competition was tough in the North American qualifier — compLexity Gaming's new lineup and the former paiN X squad were the favourites. However, TEAM TEAM was able to beat both teams to make it to the Minor and will be making their debut in the Dota 2 Pro Circuit.

Although TEAM TEAM showed a great performance at the qualifier, their chances to win the Minor are quite low — the European and Chinese teams are the favourites to lift the trophy.

Gambit Esports was the surprise of the first round of DPC events where they beat Winstrike and Co. to make it to The Kuala Lumpur Major. Although they didn't win a single game in Malaysia, the event itself was a huge success for Ivan 'Vanskor' Skorokhod and his teammates.

They tried to qualify for the second Major and even topped their group, but NoPangolier was too strong in the playoffs. They beat Gambit and VP to make it to the Major. VP came back after this surprising loss and crushed Gambit in the Losers' Finals.

At least the games in the Minor qualifier went to their favour: they beat Winstrike and Team Empire Hope to make it to the Minor.

The competition in China is really tough — every team wants to earn enough points to make it to the first The International on Chinese soil. While PSG.LGD, Vici Gaming and Team Aster are the top three of the region so far, it's a tough fight for the two Minor slots.

EHOME finished fourth at The Chongqing Major qualifier. They were eager to get at least a slot for the Minor event after missing out in round one. Keen Gaming, Royal Never Give Up and Team Root were the opponents — and every team has its stars.

xiao8's EHOME lost to Keen Gaming in the first round of the playoffs, but beat RNG and ddc's Team Root in the Lower Bracket.

EHOME has a good combination of young talented players like Li 'ASD' Zhiwen and Luo 'eGo' Bin with the experience of two TI winners (Zhang 'y`' Yiping and Zhang 'Faith Bian' Ruida. On top of that TI4 winner Zhang 'xiao8' Ning shapes the team as their coach.

Only captain Song 'dark' Runxi and Zhai 'Ying' Jingkai were part of the Keen squad that qualified for ESL One Hamburg 2017 — a lot has changed since then:

Keen Gaming built a new roster after The International 2018 to compete with the best teams of their region. Therefore, they signed top-level players like TI7 finalist Hu 'Kaka' Liangzhi as well as the EHOME veterans Wang 'Old chicken' Zhiyong and Yang 'Eleven' Wei Ren.

The team had problems during the start of the season and didn't even make it to the regional qualifier of The Kuala Lumpur Major. However, they worked on their problems and had a flawless performance at the Minor qualifier where they even beat EHOME convincingly with a 2-0 victory.

OpTic Gaming* disbanded after TI8 and the core formed a new team with Ninjas in Pyjamas. Adrian 'Fata' Trinks and Marcus 'Ace' Hoelgaard joined from Team Secret to complete the roster.

Their best performance so far was at The Kuala Lumpur Major where they finished fourth. At the Chongqing qualifier NiP lost to Vega Squadron and The Final Tribe and didn't even make it out of the groups.

At the Minor qualifier on the other side, they took revenge and beat Vega not only in the group stage, but also in the Lower Bracket of the playoffs. Only OG was able to beat ppd's team — and this will be most probably the same case for the Minor itself. Both teams will be fighting for the crown and the last ticket for the Major.

OG is the current The International 2018 champion and everybody is excited to see the team finally in action on LAN. After lifting the trophy OG took a break and decided not to attend the first round of the DPC events.

Their first qualifier was for The Chongqing Major where they fell short to Alliance twice and didn't make it out of the group stage. The TI champion had to cope with the fact that carry player Anathan 'Ana' Pham left and had to be replaced.

Per Anders 'Pajkatt' Olsson L. played for the team during the Major and Minor qualifier. OG had a better performance at the Minor qualifier where they lost just one game throughout the whole event. Even Ninjas in Pyjamas found no way to stop them in the best-of-three series.

One week before the Minor started OG surprised the community with the news that Per Anders 'Pajkatt' Olsson L. left the team — the replacement was announced a day later:

Who will win the The Bucharest Minor?