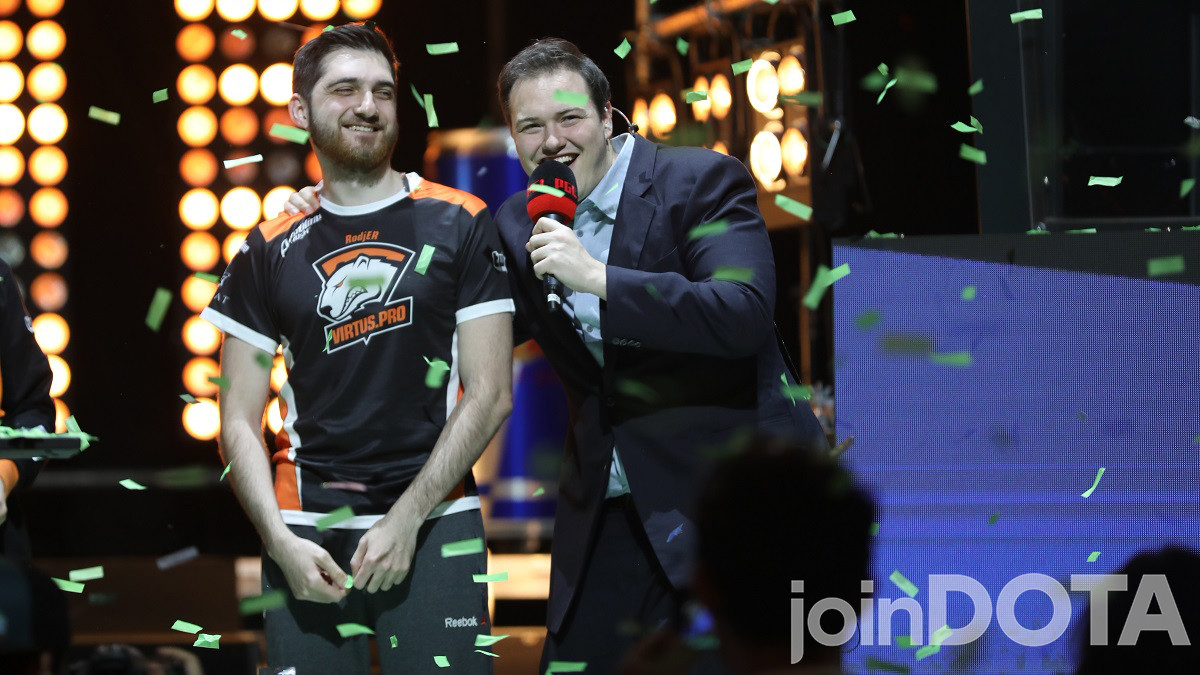 posted by Brasozial,
The Russian support Vladimir 'RodjER' Nikogosyan has played for lower-tier teams for more than three years, but now he is finally on the top of the world. Can he take his first win at The International?
ADVERTISING:
ProDotA Gaming*, Aware Gaming*, FlipSid3 Tactics*, Gus Gaming* - RodjER has been part of many different CIS teams since his professional career started at the end of 2013. It took him a while to rise to the the mid-tier teams of the CIS region, to finally make a dream come true — compete at The International — and then, in 2017, it happened.

RodjER can finally compete with the best in the world

What a surprise! Natus Vincere were the favourites for the CIS Qualifier, even though Danil 'Dendi' Ishutin and the Ukrainian squad had struggled in recent years. However, the CIS region wasn't seen as particularly competitive back then, which is why their chances were still pretty high.

However, the guys in yellow and black didn't even make it to the playoffs — four teams proved stronger than Na'Vi. One of those teams was Team Empire. One month previously, RodjER had finally joined a strong CIS team and was able to celebrate successes. By beating Team Spirit twice and Vega Squadron without losing a single match, Team Empire qualified for The International 2017 — RodjER's first TI appereance.

It was only the second time at all that he had even attempted to qualify for the event in Seattle. He previously failed in the The International 2014 Europe Q. with Aware Gaming.

To success under the wing of Reso

At TI itself Empire were not able to play with a hard carry Simon 'Chappy' , so Roman 'Resolut1on' Fominok helped the Ukrainian-Russian mix. As one of the biggest underdogs of the tournament Empire kicked Cloud9 G2A* and Evil Geniuses out of the tournament. Reso was in the spotlight, but RodjER was the support at the back who played a flawless, sacrificial game — the perfect strategy for Empire's success.

Their playoff run ended against Team Liquid in the Lower Bracket; the dream for Empire was broken. However this was the start of RodjER's personal success. After playing for a lot of no-name teams he finally was acknowledged by the top teams in CIS — and he made the right call after TI and switched team.

In an interview with cybersport.com the Russian support player stated:

"I contacted Akbar [Akbar 'SoNNeikO' Butaev] myself. We’d been in touch for a long time, and about a week ago, the team’s managers wrote to me.[...] It was an important decision, but I knew what I wanted, and it took me a mere day or two." - [size=10]Vladimir 'RodjER' Nikogosyan

RodjER took all options into his own hands and started to play for Natus Vincere — one of the most well-known organizations in his region, although they were lacking good results in recent months. However, the support was the perfect man to lift the hopes of Na'Vi fans.

Several good qualification results in the first DPC and a fourth place at a Major put Na'Vi back on the Dota 2 map, but RodjER wanted to take a step further - and again he made the right call and switched the team.

RodjER started to play for the best team in the CIS region — finally he was on top, although he had to help his new team out of a crisis. After winning the first Major at ESL One Hamburg 2017, Virtus.pro were struggling and ended up with a disappointing result at DreamLeague Season 8, where they barely even reached the tournament in the first place.

VP needed a change. RodjER arrived and the CIS squad got back on track immediately — they won ESL One Katowice 2018, their second Major of this season, and from that point on VP established itself as the best team in the world. They're the favourites for The International 2018. In another interview with cybersport.com Aleksey 'Solo' Berezin was asked about RodjEr:

"...we've known that RodjER is a very good player for a long time, even before TI. But we had our position 4 in Lil and we liked him as well and we tried our best for a long time until we had to do that [roster swap]. RodjER is just in a better shape." - Aleksey 'Solo' Berezin

"Everyone of my team mates deserves this trophy."

We snagged a quick interview with @rodjerdota after he received the #MBmvp trophy. #ESLOne pic.twitter.com/qsrvGhNgoQ

RodjER needed a top team, and this top team needed him to become the best team in the world. He is attending The International for the second time in a row, and the chances are high that he will do even better than last year. Can he win The International 2018?