Vladimir 'RodjER' Nikogosyan was at maximum and that the Russian was key to their return to form, which ended in victory at the ESL One Katowice Major over the weekend. Although the captain believed the team's midlaner

Vladimir 'no[o]ne' Minenko deserved the MVP award from an in-game point of view, and added with a cheeky smile that he was sure No[o]ne would also win a Mercedes soon.

Do you agree with Solo? Who deserved MVP more? 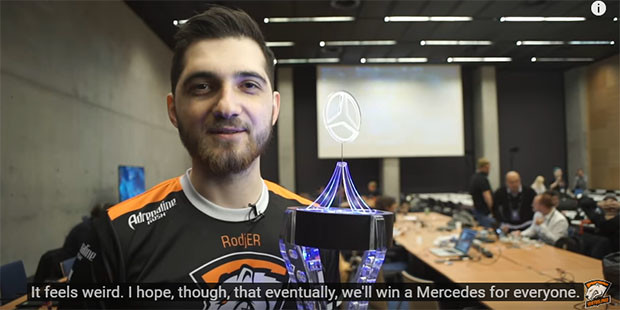 Rodjer hopes that "eventually we'll win a Mercedes for everyone"
Rodjer, who joined the team from

Natus Vincere just over a month ago, was voted the MVP of the $1 million Major in Katowice. "I'm shocked," said Rodjer. "In fact in my opinion, every single one of the guys deserved this trophy. It feels weird. I hope though, that eventually we'll win a Mercedes for everyone." As it stands now, VP have won two Mercedes, as


Ramzes: "Had we assigned our lanes better, we'd probably end the series 3-0"
On the topic of VP's 3-1 win over Vici Gaming in the Grand Finals, Ramzes said in the video interview that had he had more experience in his lane match-up in game 3, there would not have been a game 4. "Death Prophet and Bat Rider is their signature pick," said Ramzes. "After we won two games against this pick they seemed to lose their game. Well.. not quite, they won the third game after all."

In Game 3 Ramzes played Broodmother and was matched against

Zeng 'Ori' Jiaoyang's Puck, a lane match-up Pasha said VP expected him to win. However, Pasha also said the team we were taken aback by Ori's Puck and that the VG player took VP by surprise with an "incredible game".

"I had no experinece in the lane match-up against Puck - had we assigned our lanes better, we'd probably end the series 3-0," said Ramzes.

VP's victory at ESL One Katowice makes them the first team to win two Pro Circuit Majors and sets them up nicely for the Bucharest Major which starts next week.