Planet Dog will play The International as HellRaisers

posted by Abelle,
The seemingly inevitable move by

Double Dimension to an established organization has happened with less than two weeks to spare before the TI group stage.
ADVERTISING:
Planet Dog will play at TI7 under the banner of Hellraisers Dota. #TI7 #Dota2— Wykrhm Reddy (@wykrhm) July 19, 2017


The team's name has also been updated in the compendium, though the HellRaisers organization themselves haven't made any kind of official announcement. The latest post from @HRdota2 on Twitter is about the team disbanding way back in March 2016. 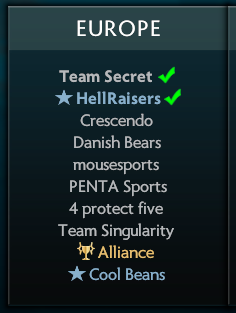 Planet Dog qualified for The International 2017 after fighting through two open qualifiers. In the first, they were knocked out in the final round by Loda's

Cool Beans* stack. They won the second open qualifier,then had an impressive run in the playoff round which grabbed them the second of two European regional qualifiers spots.

ProDotA Gaming* who decided to part ways, forming Planet Dog and picking up

Uros 'swiftending' Galic as their new carry, to replace