Last day to sign up! joinDOTA League season 10 is close!

posted by joinDOTA Staff,
Last chance, beloved community. The last 24+ hours of the sign-up for the 10th season of the joinDOTA League are counting down. Read more about the new and improved format and how to participate in our contest for 240 Battle Point levels.
ADVERTISING:
Update: To give a few more teams the chance to join in, the sign-ups have been extended by one more day, now ending one June 22nd 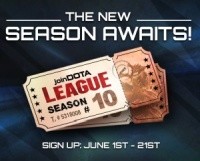 The joinDOTA League returns for its tenth season and we will be revamping it to make it more competitive, more balanced and hopefully more fun!

The joinDOTA League allows you and your friends or partners in crime to sign-up for free to take part in official matches against other teams from your region. The best teams can climb the divisions to face stronger opposition, and if you want a fresh challenge for you and your 5-stack, this is a great place to start your journey.


Improvements to the Starter Division! Come one come all
The Starter Divisions are our most popular with hundreds of teams joining the fray, and for this season we will be tweaking the format. The number of teams in a group will be reduced from 10 to 8, shortening the groupstage so you can then do battle in the Mid-Season Playoffs against teams from other groups with a similar record.

Sign-ups for the joinDOTA Season 10 League end on June 21st at 18:00 CEST. Every signed up team automatically takes part in our contest for 240 levels of Battle Points. Yes, it's that's easy and simple. You can read more about the contest here.

You are missing 4 friends to play with? Then head over to our forum and team up! Other teams and players are always looking for someone to join the joinDOTA League with.

We are looking forward to seeing you for the new season! Time to get your troops ready for action.