Liquid and Alliance to challenge OG in The Defense 5 Finals

posted by Malystryx.GDS,
In September we relaunched The Defense, and after three months, two stages and even appearances on Danish TV ft. Maelk and SyndereN, Season 5 will end with a LAN Final to be held in Berlin in a fortnight's time. Fall Major winners OG are among the participants for the $77,000 competition which will be held in joinDOTA's home, the Freaks 4U Gaming offices. Who is on the guest list? Find out inside.
ADVERTISING: 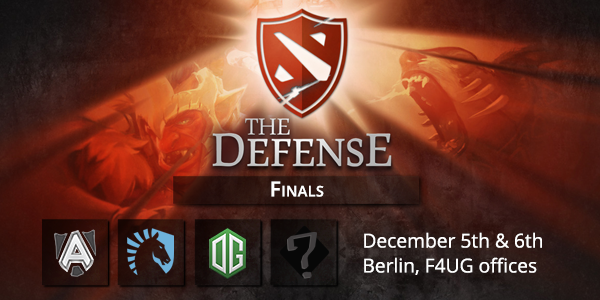 The last time we held a competition in our offices was for the D2CL Season V which attracted a huge online viewership over the two-day event, and we're expecting The Defense 5 to be even more enticing. Three teams are locked in to participate, with a fourth to be unveiled shortly. The event will go down on the weekend of December 5th & 6th in a double elimination, best of three format with four teams.

The road to the finals

Five weeks into the competition, phase 2 of The Defense saw top teams entering the mix to fight up against the six teams that qualified from phase 1. Group A saw Alliance and OG marching away step by step. Only Virtus.pro managed to stay in sight, but unfortunately the last two matches could not be played due to scheduling issues. This leaves OG and Alliance sharing the top position.

Meanwhile Group B stayed a lot closer with the exception of compLexity not living up to expectations. Five teams stayed in the race for a really long time until Team Liquid finally stood out to secure the first place with a 7-3 record. Vega and 4 Clovers ended up tied for the second position, while NiP as well Arcade.PR were also just one victory short of joining them. Unfortunately both Vega Squadron as well as 4 Clovers & Lepricon have withdrew their participation for the finals, leaving the tiebreak undplayed and the last slot for the LAN finals vacant for the moment. We will be announcing a replacement in the coming days.

OG - The new champion of Dota 2

Since qualifying directly for the Defense 5 , OG went off and won the Fall Major, coming all the way from the lower-bracket to defeat Team Secret 3-1 in the Grand Finals. OG ended up 1st in both groupstages in The Defense 5, finishing 9-1 in Stage 1 and 8-2 in Stage 2. The first Major title holders will be in Jonkoping this week for DreamLeague Season 4 before then travelling down to Berlin.

Team Liquid - The team everybody was missing in Frankfurt

Team Liquid have not done too badly for themselves since their formation in September. They placed 4th at the Nanyang Championships in Singapore last month, as well as taking the D2CL Season 6 title after a 3-1 victory over Team Empire. They unfortunately missed out on the Fall Majors, which means the prospect of them going up against OG at the Defense 5 LAN is certainly something to look forward to.

Alliance were cruising heading into the Fall Majors, defeating the odds to qualify for it after defeating NiP's megacreeps. However, it all went horribly wrong when they reached Frankfurt, and a rather embarassing defeat to

Mineski should be Alliance's trigger to step up their game. The Swedes drew with OG when the pair met in the Defense 5 groupstage, and Alliance could definitely cause upsets if they get back into their groove this week at DreamLeague Season IV.

All of our commentary team will be in Berlin to broadcast the event on the 5th-6th December so be sure to tune in. We will follow up with more details about the event, schedule, and of course the fourth team soon!