posted by Roegnvaldr,
The [B]DreamHack Summer 2012[/B] festival, from the 16th to the 19th of June, is fast approaching, and with it comes the [B]Corsair Vengeance Dota 2 Cup[/B]. With 12 major teams invited for the tournament, we thought that it was only fitting to provide overview for each of them; for people the who have just arrived in the world of Dota 2, as well as for veterans in the scene to reminisce. Additionally, the author has picked VODs showcasing each team's talent and potential.

Considered by many to be the best team around, these claims do not go unfunded. Their fame hit a peak when they became winners of Valve's The International (2011), the very first Dota 2 Tournament, where they took back home one million dollars as their prize. Na'Vi didn't stop there - they took part in many games and cups, winning tournaments such as joinDOTA's The Defense (2012), the first season of The Premier League (2012) and recently the first season of The Star Ladder (2012). Having immense amounts of experience and endurance, Na'Vi is certainly not a team to be taken lightly. 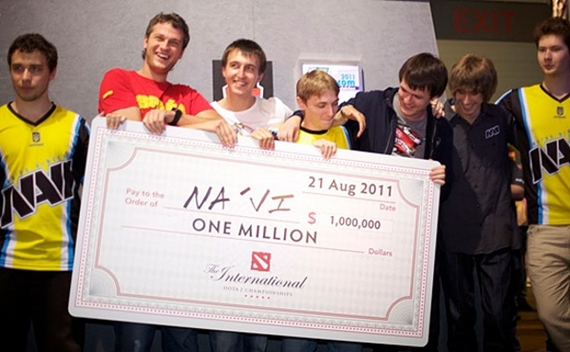 mortal Team work
mTw is another team that has been around longer than most people can remember. Their roster has changed often, but that didn't stop them to become a household name. Their past achievements include winning the previous DreamHack Winter Dota 2 Tournament (2011, under the name Wild Honey Badgers), the GD Studio Cup (2012) as well as winning the acclaimed West Qualifiers for The International (2012). Their popular and charismatic captain,

Counter Logic Gaming
A very powerful group of players, CLG is one of those teams that has had many ups and downs, but nowadays prove to be one of the most stable teams in the scene and one of the more experienced ones as well. Their tactics are generally by the book, but still executed well. They recently won both the Fnatic RaidCall Cup (2012) and the joinDOTA Masters V (2012), as well as achieving 3rd place in the first season of the Star Ladder Star Series (2012).

Evil Geniuses
Having undergone various roster changes, EG still remains as one of the strongest North American teams in the Dota 2 scene. Known for their aggressive tactics and branching in other areas of eSports, Evil Geniuses is a team that shows few weaknesses and lots of strong points. Their efforts are better shown in tournies, such as when they took first place in the first joinDOTA Masters (2012), as well as Team Dignitas' Dota 2 Invitational (2012). Notably, they also took 3rd place during The Defense (2012).

mousesports
mouz is a team that will bring about all kinds of opinions from different people. Their skill and organisaton is both greatly criticized as well as valued by many in the community. In short, mouz can be a "mixed-bag" sort of team, but their effort and antics are never to be denied. Most notably is their player SingSing, whose personality and aggressive style of play has won him many fans. mousesports achieved 1st place during the Dota2Replays Brawl (2012) as well as during the GD Studio: Arena #1 tournament (2012). They also placed 2nd during the ASUS Spring Cup (2012).

Darer
Darer is a team that has gone through many roster changes caused due to inner conflicts and sadly this has, at many times, damaged their capabilities. However, this has not stopped Darer from attracting strong players to their team. They have achieved second place on both the fifth and eighth edition of joinDOTA Masters.

Quantic Gaming
Quantic Gaming is possibly one of the main rivals of Evil Geniuses in regards to top North-American teams. They have an aggressive and quick play style, and have taken many prizes in small competitions, such as first place in the joinDOTA Masters II and VI (2012) and the joinDOTA Open I (2012) as well as other cups like Defend Your Base (2012). However, the team has yet to take part on a big scale championship and claim its prize. With Mikey not attending, Matrim will be the stand-in and it remains to see how well the team chemistry will be.

Keita-Gaming
Keita Gaming is a rather obscure team on the European scene when compared to other teams, perhaps due to their quiet nature. The team has gone through tough times lately, but they have shown their capacity to overpower bigger teams before. Such was the case in the Star Ladder: Pro series (2012) where they achieved first place. Also worthy of mention is their 2nd place in the GosuLeague Season 1 (2012).

The Tough Bananas
Perhaps one of the best names for a team in this existence, The Tough Bananas are a recently-made group with diverse team members and fast tactics. They have shown great potential and have quickly risen in fame and rankings alike. As of late they've shown surprising abilities by winning the joinDOTA Masters VIII (2012). Before this they've also achieved the 1st place in Four Players League Play4Dota #2 (2012). With neNo not available due to real life commitments, fan favorite linklink will be replacing him for DreamHack.

Infused
The all-Swedish team Infused has been around for quite a while and despite it's constant ups and downs in matches, Infused is one of the more stable teams around. This generally means the team has better synergy and doesn't crumble under pressure. They achieved first place at the GosuLeague season 1 (2012) and second place on D2E Challenge (2012).