Vici Gaming in the Grand final of the 2015 DAC Asia Championships, taking home first place and over 1.2 million dollars in prize money. The final series, which was played on the Shanghai Grand Stage earlier today, saw EG take a convincing 3-0 victory over their Chinese opponents.
ADVERTISING:

EG off to an explosive start! - Game one

The Americans got off to an early lead in the final series, with

Peter 'PPD' Dager drafting himself his signature Treant Protector alongside

Clinton 'Fear' Loomis’ Troll Warlord; they proceeded to make quick work of Vici’s offensive tri-lane, claiming two kills in the first six minutes. However it was

Saahil 'UNiVeRsE' Arora who stole the show, catapulting his team to the verge of snowballing with a decisive counter-gank at the 12 minute mark. 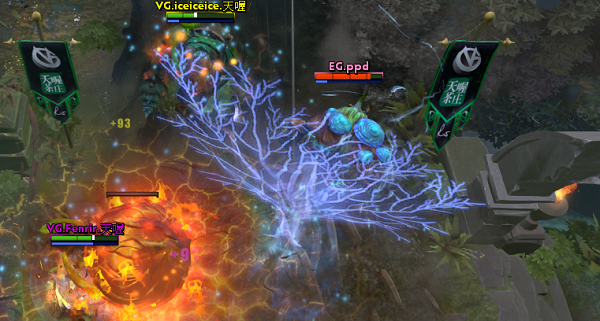 Yet, in spite of EG’s early dominance,

Dominik 'Black^' Reitmeier was still the lead farmer on Shadowfiend, picking up the slack from

Xie 'Super' Junhao’s Ember spirit, who had fallen victim to EG’s safe-lane. Nonetheless, the Americans found themselves in comfortable territory, utilizing the dire side to take multiple Roshan’s and subsequently pressure Vici’s jungle. This culminated in a pivotal fight that saw Super die-back on Ember, resulting in a swing of over six thousand gold. From there it was EG’s game to lose, with Aegis up, and a Daedalus on Fear’s Troll, the Americans pushed down Vici’s base, forcing them to tap out at the 40 minute mark and giving EG a 1-0 advantage in the series.

A quick victory on the horizon? EG continue to dominate! - Game Two

Unfortunately for Vici, the Americans showed no signs of slowing down in game two, opting for a change in pace with Fear on Anti-Mage, they progressed into an explosive mid-game after out-farming VG in the laning stage. ’UNiVeRsE’ was once again the key player for EG, picking up his blink at the seven minute mark before securing his team a further five kills in the span of three minutes. The subsequent chaos was good news for Fear who took the time to extend his net-worth lead even further, snowballing far too quickly for Vici to deal with.

Even with Black^ farming consistently on Medusa; Vici were still unable to muster enough fight quickly enough to stop EG’s high-ground push, ultimately conceding their bottom rax after losing several heroes one after the other. Once the base was broken there was nothing Vici could do to stop the oncoming onslaught. VG finally concededed game two at the 35 minute mark, putting EG one match away from a first place finish.

In comparison to the previous games Vici got off to a good start in the third match, aggressively pressuring

Syed ’Sumail’ Hassan’s Storm Spirit by killing him four times in five minutes. However, thanks to some incredible defensive play from PPD on Earthshaker, EG managed to claw the game back into their favour, taking a number of successful engagements until Sumail had all but recovered from his less than ideal start, even challenging Super’s Shadowfiend for the net-worth lead.

After EG’s five minute rampage Vici were forced back to the same defensive stance they endured in the first two games, with EG controlling Roshan and farming the entire map. Before long both Fear and Sumail were leagues ahead of Vici’s cores, barrelling down the Chinese squad’s lanes until they finally broke the base, forcing VG to call GG at minute 39 and relegating them to a second place finish.
With their win Evil Geniuses have claimed first place in the 2015 DAC Asia Championship, taking home $1,284,158 for their efforts. The American squad came into the main event as one of the favourites, after playing a relatively successful group stage; however, two crushing losses forced them into the lower bracket, where they had to fight their way up to the Grand Final, ultimately winning the final two series’ without a single loss. 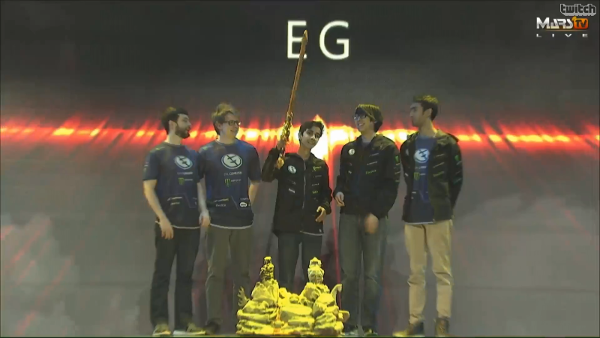