posted by Meliora.Infinitum,
GEST The Challenge - June wrapped up earlier today with

DK battling for supremacy in an awesome, yet atypical, Bo5 grand finals. Take a look inside to see which of the teams made it all the way and snatched the biggest share of the ~$10,000 prize pool, as well as another title.
ADVERTISING:

Coming off of an impressive win against

DK was perhaps a small favorite coming into their second Bo5 finals in just two days. Both teams had successfully combed their way through numerous teams including

NewBee to get to the Grand Finals of GEST the Challenge - June. While

iG has been showing impeccable form in the past week or so, they truly had a mountain to climb in order to beat the Summit second place finishers

The first game was a rout for

iG as their fellow compatriots were unable to match the great synergy and perfect item timings of the enemy team. While the game was relatively even until the point of no return,

DK were never really in control of the game, pushing and prodding where they could, but ultimately failing to effectively turn the tide in their favor. With 24 minute Roshan extravaganza going to iG, their death ball was all but unstoppable, and DK had no other choice that to concede the first game of the series.

The game two started off evenly, but due to some interesting drafting choices it was quickly evident that

iG would need to get ahead in the laning stage or they would be crushed later on by the push-oriented Viper/Shadow Shaman/Death Prophet combo. All seemed to be going according to plan for iG in the begining, but at 11 minutes in a giant clash between the teams under dire middle t1 tower,

DK took the momentum away from iG on top of four hero kills and a tier 1 tower, only losing 2 heroes themselves. With the Dire advantage, Mass Serpent Wards and Exorcism, DK had no issues of bringing down the Roshan fast and uncontested, and with the Aegis in their back pocket, they mounted an assault on the enemy base just 18 minutes into the game. While they were repelled once, DK came back for the second try just few minutes later and were ultimately able to break the base and the back of iG for the game two victory. The series was now tied 1 to 1. 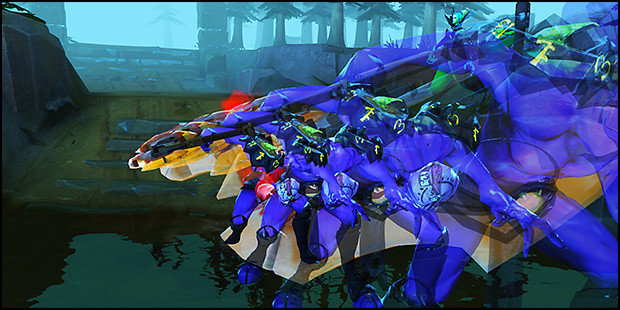 Faceless Void was played in every single game of this Best of Five series.

The game three started off strong for

iG as the great rotations from the support duo, Chuan & Faith, secured them the early game advantage. With their extremely tanky heroes they were able to withstand the enemy blows and mow down towers, despite the fact that Faith’s Shadow Shaman still hadn’t hit level six, 14 minutes into the game.

DK traded where they could, but were losing ground fast, even though Mushi’s Outworld Devourer was getting a lot out of his Midas. A quick Roshan with the Serpent Wards and the team fight that ensued immediately after put iG comfortably ahead, just 16 minutes into the game. Both teams settled down a bit for the next few minutes, but with 21 minutes in the clock and the last minute of time left in the Aegis, iG pushed into the enemy base. A buyback from Faceless Void kept DK from totally losing control of the game, but they did lose their Melee Barracks in the process. Pickoff on Mushi, BurNIng & LaNm sealed the game few minutes later, as DK had no way to defend their base any longer.

The game four was a blast from the past with Faceless Void taking on Anti-Mage, in a game that was almost dead even all the way to the 30 minute mark. While this was mostly due to BurNIng’s amazing farm on his Anti-Mage, despite his one death and a buyback, at the end of the day, it was not enough.

iG kept obliterating Mushi on his Templar Assassin and he was never really able to lend a helping hand to the Anti-Mage in the team fights. That forced

DK on the back foot, and despite their best efforts they were unable to stem the bleeding. With the deciding kill on Anti-Mage without a buyback, just when he had purchased the Heart of Tarrasque, allowed iG to push into the enemy base taking down both tier 4 towers before Burning could re-spawn. One last fight ensued, but with the control that iG had, they were able to single out and destroy the last hope DK, winning in a convincing fashion over their fellow compatriots.

Team DK after a quick and exciting Bo5 series.