posted by Malystryx.GDS,
Over 90,000 votes were cast for the inaugural joinDOTA Awards to decide the winners of nine different categories. Who was the best support duo of 2013? What did you deem the best drama? Which player improved the most? Find out all of our winners inside.
ADVERTISING:
1. Play of the Year 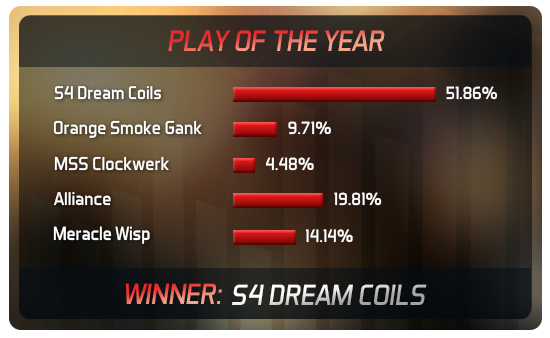 "One of the most talked about plays of The International 3, the "Million Dollar Coil" took place in the Grand Final between

Alliance. The swedes were on the backfoot and went for the last chance they had: backdooring Na´Vis base while they try to win a small clash at the Roshan pit. Na´vi immediately knew what was going on and tried their best to disengage and get back to the base. However S4 managed to hex Puppey´s Enigma and more importantly interrupt the TP of Dendis 'Godlike' TA. The move was crucial as it delayed both Dendi and Puppey getting back to base in time to fend off Alliance from killing their throne. If for some reason you have not seen this incredible play then check it out here." - Malystryx 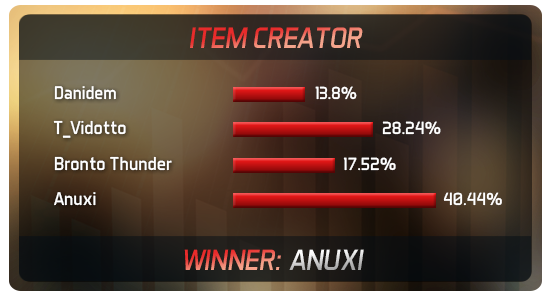 "Stephanie “Anuxi“ Everett is one of the best known Dota 2 item creators. She was just doing concept art in the beginning but soon discovered 3D modeling. Starting 2002 “Anuxi“ has a lot of experience under her belt also working on games like RIFT and Trion Worlds. Now she is a full-time item creator with her most famous creations being Shagbark, the Beaver Knight courier and the Owlion. You can watch an interview with Anuxi here." - Vekus 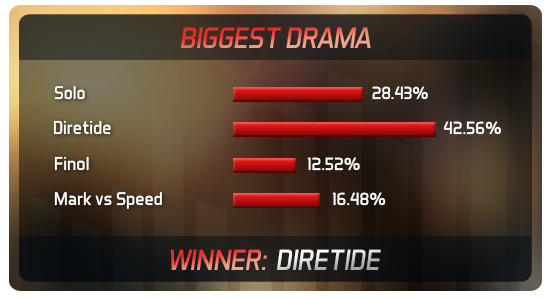 "In the Washington Post, Gabe Newell said of Diretide, "Yes, in fact, we [were] doing something stupid." He had this PTSD-esque revelation several months after the famed Diretide Denial of 2013, demonstrating just how massive this outcry was. When Valve gave the DotA community a darling then tried to smother it quietly in the dark, our community fought back louder than if Valve had actually attempted to kill our children. Facebook and twitter exploded so fiercely with protests of "VOLVO plz #givediretide" that the real Volvo got involved." - GorgonTheWonderCow 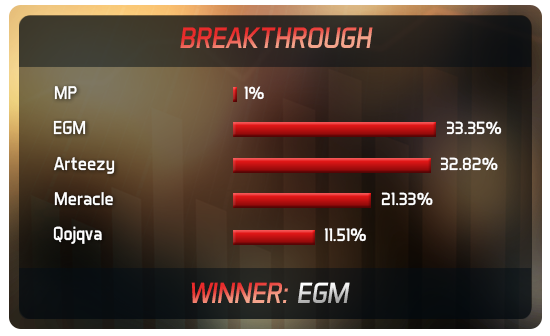 "EGM, short for Enter God Mode did indeed play in transcending fashion this year. His reputation has only been on the rise since even before the Grand victory at The International 2013. Known mainly for his amazing support plays, EGM keeps Loda and S4 relevant in the game even if he has to be the sacrificial lamb. The synergy he has with his teammates shows clearly during the initiations and ganks no matter what kind of strat Alliance wishes to adopt. His performance is only getting better and the community has not been able to ignore the impact he has had." - Venediction 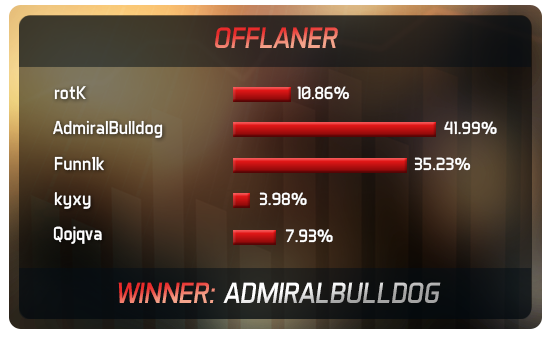 "Henrik “AdmiralBulldog“ Ahnberg has risen to fame and glory rather quickly as he managed to get into the competitive scene and win The International 3 within less than a year. His story sounds like a fairy tale: being a pubstar with an astounding number of games on Lone Druid, he was one-day recognised by Danil “Dendi“ Ishutin and played as a standin for Na´Vi. He enjoyed the competitive atmosphere and joined

No Tidehunter followed by

Alliance when it was founded. He is often criticised for his rather small hero pool but what he lacks in quantity, he makes up for in quality." - Vekus 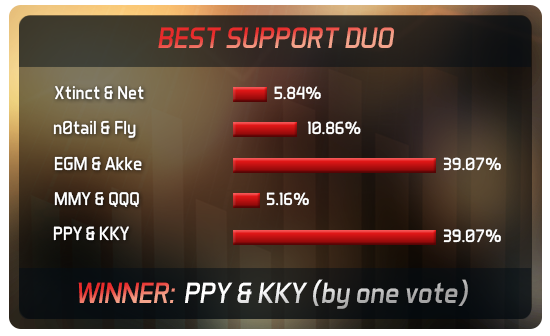 "The closest vote in our awards this year, the Best Support Duo award saw Kuroky and Puppey win by just a single vote, finishing a fraction ahead of EGM and Akke. Kuroky and Puppey started playing together in 2007 on Kingsurf International, and the two pretty much immediately restoked the fires of bromance when Kuroky was added to Na'Vi's roster at the end of February. Their perfectly executed roaming ganks and support of XBOCT and Dendi's tactics make then a formidable duo. As the only non-Ukranians on Na'Vi's current roster, it's no surprise they've managed to appear psychically linked during playmaking. It doesn't take wards to see why this duo is a standard of support play across the entire competitive scene." - GorgonTheWonderCow 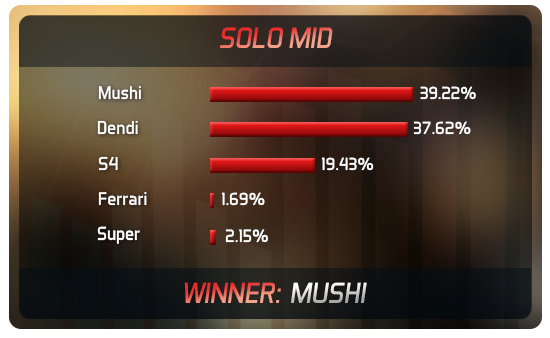 "One of the game's most gifted players, Mushi logged a 200-97 (67.3%) record in competitive Dota 2 during 2013, leading all players on the Eastern scene in both total wins and win percentage. Both his remarkable technical skill and versatility were on display in The International 2013, where he played 19 different heroes in 28 games, and led Orange to a 3rd place finish after pushing Na'Vi to the brink of defeat in the Loser's Bracket Finals. Shortly after, in one of the biggest stories of the year, Mushi joined DK, forming one of the strongest rosters in the current scene. It's hard to name a single player who had a bigger impact on pro Dota 2 than Mushi during 2013 -- and if anything, his impact in 2014 may be even bigger." - Nahaz 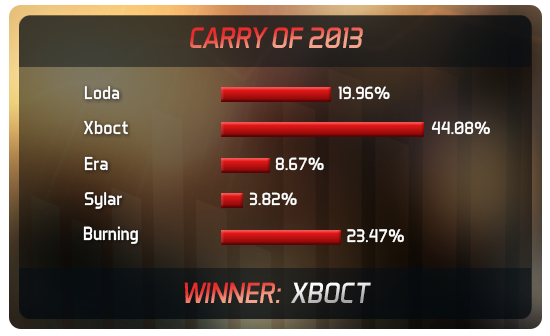 "Xboct, the infamous (4)th best carry owes this landslide win as much to his charm as he does to his outstanding skills. His fans still cheer for his Double Rapier Build while haters shudder at the thought of his unpredictably explosive tactics. A versatile hero such as himself is always heavily relied upon, although under a lot of pressure but more often than not he delivers! Xboct is never really out of the picture in a game, which is why he's earned a reputation of keeping his enemies on their toes even when Na'Vi plays from behind." - Venediction 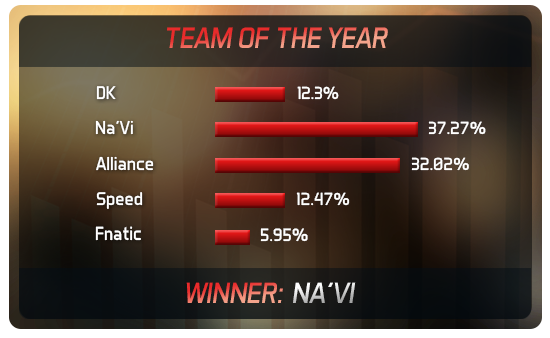 "Natus Vincere, latin for born to win, are the only team to have featured in all three International Grand Finals and despite XBOCT tweeting that "It is unfortunate that your fate lies on a couple of useless idiots. Thanks for all the support but I don't think Na`Vi will continue with the current roster" after taking 2nd place at TI3, the team stuck together. Aside from a silver medal at TI3 worth $632,000,in 2013 Na'vi won 7 tournaments, making their annual winnings over $762,000, a staggering figure. Their unique blend of skill, charisma and determination has helped keep them riding high in both the rankings and public opinion." - Malystryx